137 - Sustainable Bodhisattva Practice when the World is (Literally) on Fire
139 - Suchness: Awakening to the Preciousness of Things-As-It-Is

Despite the placid appearance of most Buddha statues and the Buddhist precept against indulging anger, there is a place for fierceness and compassionate anger in Buddhism. Especially when we’re faced with injustice or need to protect others, we may need the energy of anger or fierceness to make ourselves heard. I discuss how respect for appropriate fierceness and anger appears in Buddhist iconography and mythology.

Today: The place of fierceness and compassionate anger in Buddhism, particularly as conveyed in Buddhist iconography

On May 25th, an African American man named George Floyd was killed by a white police officer who knelt callously on his neck for almost nine minutes. Since then, the United States, and the world, has been rocked by protest.

Explosion of rage, anger, refusal to accept yet another murder of an unarmed black person by law enforcement

Seems appropriate, may even bring about change

Anger = impulse to protect someone or something

However, anger unleashed can be terribly destructive, often say and do things we regret

Anger Versus the Spiritual Ideal of Equanimity 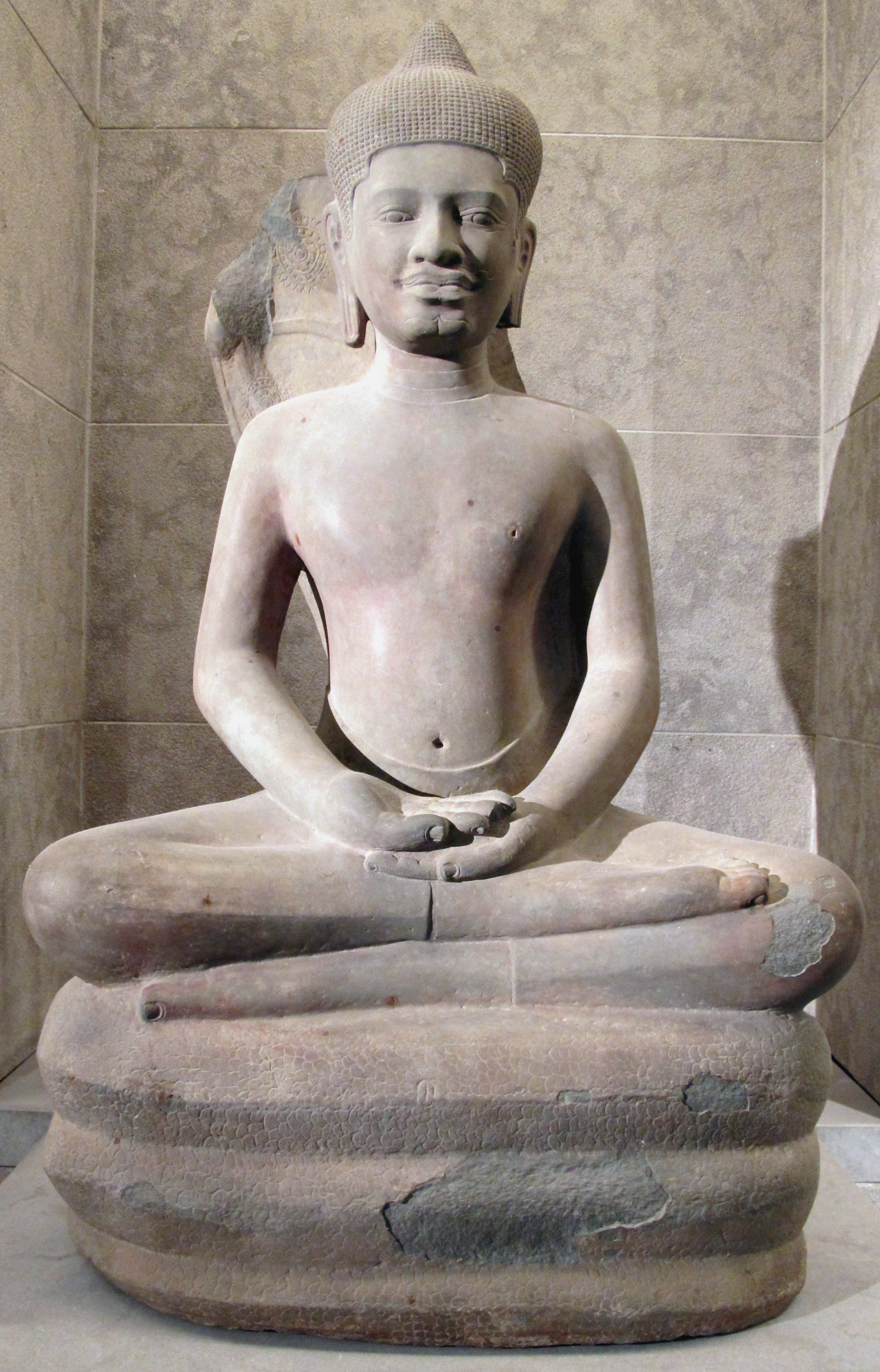 Spiritual practice: Precept against indulging anger; one of the three poisons, ill-will, sometimes translated as anger; ideal of equanimity

Ideal image of the Buddha – calm, almost otherworldly, serene, untroubled, no longer worried about the things of the world the way we ordinary mortals are – click here for image

Historically, Buddhists just assumed the world was full of these supernatural beings – Buddhism doesn’t depend on their existence, though

However, mythology conveys truth; don’t have to believe they are real, something to be learned

Fierceness and Compassionate Anger in Buddhist Iconography and Mythology

Buddhism mythology and iconography is not all sweetness and light, however!

What kind of warrior is this?

But her enemies are not common foes of flesh and bone.

His fight is with the inner delusions,

The afflictions of self-cherishing and ego grasping,

Those most terrible of demons

That catch living beings in the snares of confusion

And cause them forever to wander in pain, frustration and sorrow.

Her mission is to harm ignorance and delusion, never living beings.

These he looks upon with kindness, patience, and empathy,

Cherishing them like a mother cherishes her only child.

She is the real hero, calmly facing any hardship

In order to bring peace, happiness and liberation to the world.” 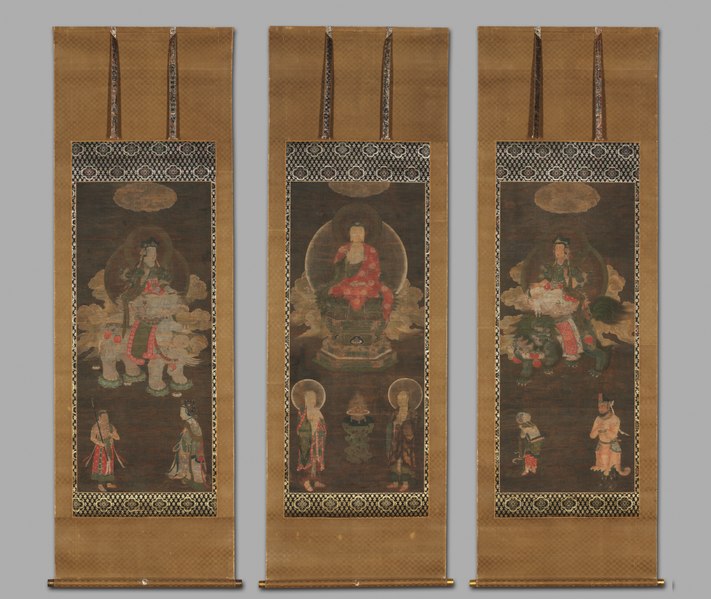 Fugen means “widely” (fu 普) “virtuous,” “worthy,” or “able” (ken 賢). S. Samantabhadra. A bodhisattva who is often paired with Monju Bodhisattva as one of two attendant figures who flank an image of Shakamuni Buddha. In this arrangement, Fugen is said to represent the Buddha’s compassion (jihi 慈悲), whereas Monju represents the Buddha’s wisdom (chie 智慧), those being the two complementary virtues that all bodhisattvas should cultivate.

(8) When paired with Monju, Fugen is the active party, practicing morality and meditation, fulfilling vows (gyōgan 行願) to save all living beings, and appearing in all buddha lands. Monju, in contrast, passively surveys the emptiness (kū 空) of all dharmas and cuts off all attachments to them. Fugen, riding a white elephant with six tusks, attends the Buddha on his right side. Monju, riding a lion, attends the Buddha on his left side.[i]

Fudo, the Immovable One, a Poster-Child for Fierceness 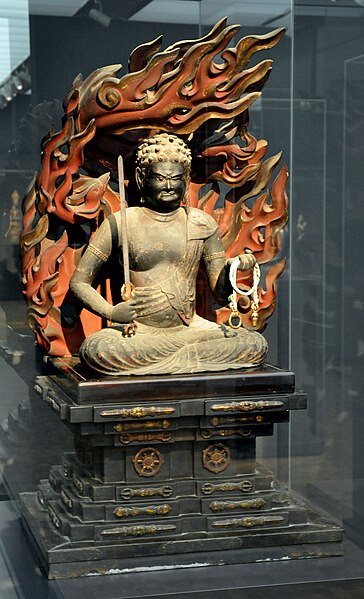 My Soto Zen lineage, through Sojiji temple in Japan, evolution from a Shingon temple

We’re called to summon the fierceness, determination, clarity of a warrior, but how do we ensure “our mission is to harm ignorance and delusion, never living beings.”

Take or Leave Images of Fierceness and Compassionate Anger

Imagery of sword/weapon? Maybe not work for you

Gun certainly doesn’t work for most of us! Teachings, tools, images as medicine, some may be poison for us at a particular time

The Dalai Lama on Compassionate Anger

Place of fierceness and anger in our practice?

Dalai Lama, in Be Angry:

“There are two types of anger. One type arises out of compassion; that kind of anger is useful. Anger that is motivated by compassion or a desire to correct social injustice, and does not seek to harm the other person, is a good anger that is worth having… Anger brings more energy, more determination, more forceful action to correct injustice…

If we act when our inner motivation is hatred toward another person, then that hatred expressed as anger will lead to destructive action. This is negative action. But if we act out of consideration for the other person, if we are motivated by affection and sympathy, then we can act out of anger because we are concerned for that person’s well-being.”[ii]

We Do Have Power: The Prophecy of the Shambhala Warriors

If we feel powerless, our anger can burn – perhaps part of this is awakening to how we aren’t powerless, how our compassionate anger and fierceness can help?

Another Buddhist image of “warriors,” from 12-centuries-old prophecy from the Tibetan Buddhist tradition, as told to Joanna Macy by her teacher:

“There comes a time when all life on Earth is in danger. Barbarian powers have arisen. Although they waste their wealth in preparations to annihilate each other, they have much in common: weapons of unfathomable devastation and technologies that lay waste the world. It is now, when the future of all beings hangs by the frailest of threads, that the kingdom of Shambhala emerges…

“Now comes the time when great courage is required of the Shambhala warriors, moral and physical courage. For they must go into the very heart of the barbarian power and dismantle the weapons. To remove these weapons, in every sense of the word, they must go into the corridors of power where the decisions are made.

“They train in the use of two weapons. The weapons are compassion and insight. Both are necessary. We need this first one [compassion] because it provides us the fuel, it moves us out to act on behalf of other beings. But by itself it can burn us out. So we need the second as well, which is insight into the dependent co-arising of all things. It lets us see that the battle is not between good people and bad people, for the line between good and evil runs through every human heart. We realize that we are interconnected, as in a web, and that each act with pure motivation affects the entire web, bringing consequences we cannot measure or even see.

“But insight alone… can seem too cool to keep us going. So we need as well the heat of compassion, our openness to the world’s pain. Both weapons or tools are necessary to the Shambhala warrior.” [A Tibetan Legend, https://www.awakin.org/read/view.php?tid=236]

Motivated by compassion, but motivated to take action, to go into the corridors of power as warriors, to dismantle the weapons…

Learning How to Manifest Compassionate Anger

How do we actually do this? Each of us explores in our own direct experience…

Dalai Lama describes meeting with refugees, feeling great sadness and anger on their behalf, and yet later being feel equanimity or even laugh… he says:

“This is not an emotional switch I turn on and off. That meeting and this moment are connected. I can experience the sadness, suffering, the absurdity, and cruelty of this world. I can share in others’ pain and groan with them. I feel the same anger and outrage. But in the present moment, that anger motivates me to find the causes of suffering in the world and to work harder in my own religious practice, so that I can confront that suffering directly and enlighten humanity.”

Acala Vidyaraja: Photograph from the remarkable Buddhist art collection at the Buddha Tooth Relic Temple, Singapore. This image was originally posted to Flickr by Anandajoti at https://flickr.com/photos/64337707@N07/34343125994. It was reviewed on 13 June 2017 by FlickreviewR and was confirmed to be licensed under the terms of the cc-by-2.0.

137 - Sustainable Bodhisattva Practice when the World is (Literally) on Fire
139 - Suchness: Awakening to the Preciousness of Things-As-It-Is

Or Make a One-Time Donation

Subscribe via email to receive notifications of new posts: